Richard Notkin is a full-time studio artist who lives and works in Helena, Montana. He received a BFA from the Kansas City Art Institute in 1970, and an MFA from the University of California, Davis in 1973. Mr. Notkin has worked mainly in ceramics for more than thirty-nine years, averaging over one solo exhibition per year. His series of Yixing (China) inspired teapots and ceramic sculptures have been exhibited internationally and are in numerous public and private collections, including the Metropolitan Museum of Art in New York, the Smithsonian Institution in Washington, DC, the Los Angeles County Museum of Art, the Victoria and Albert Museum in London, and the Shigaraki Ceramic Cultural Park, Japan. He has held visiting artist positions and conducted over 250 workshops throughout the world. Among his awards, Richard has received three fellowships from the National Endowment for the Arts, as well as fellowships from the John Simon Guggenheim Memorial Foundation and the Louis Comfort Tiffany Foundation. 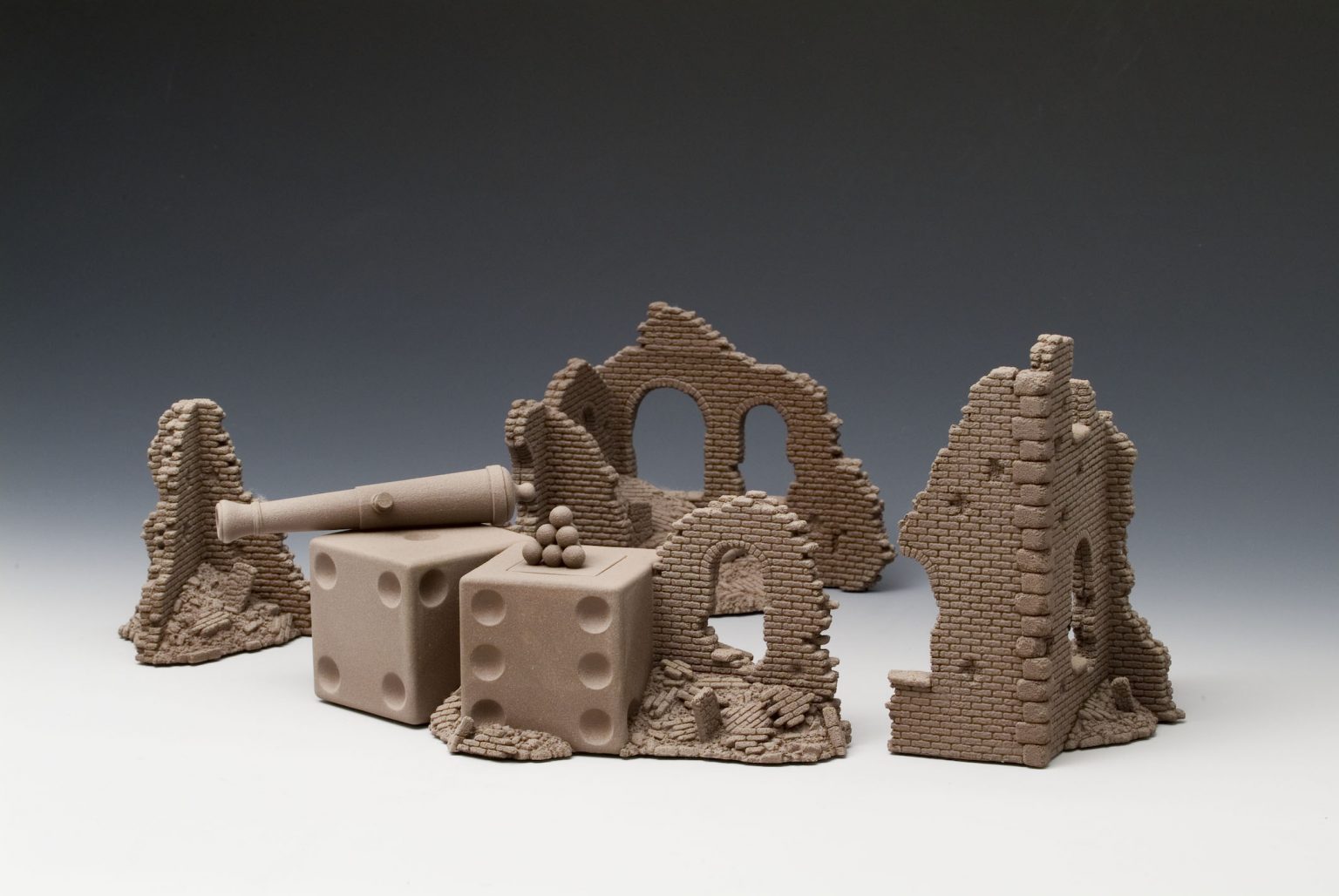 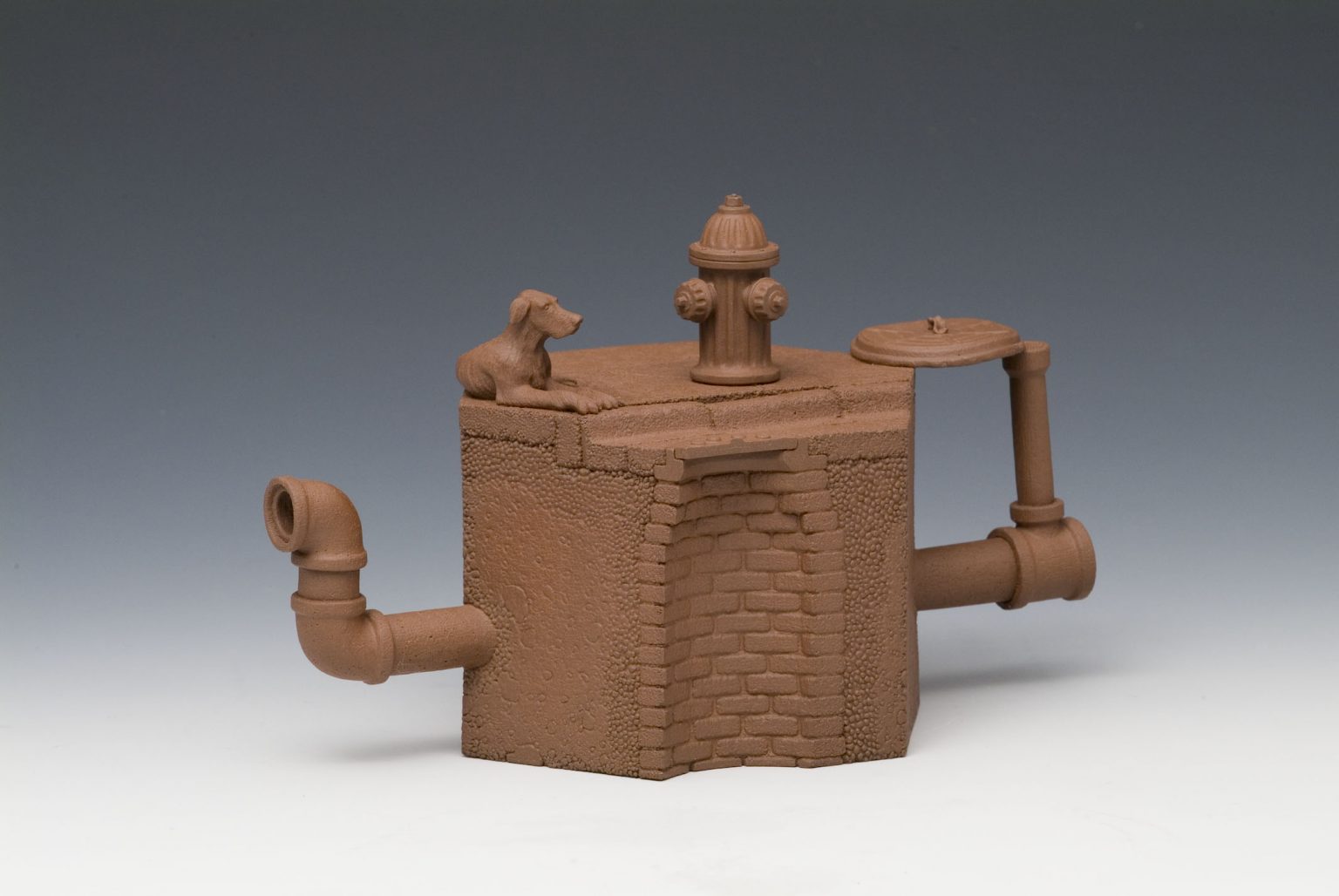 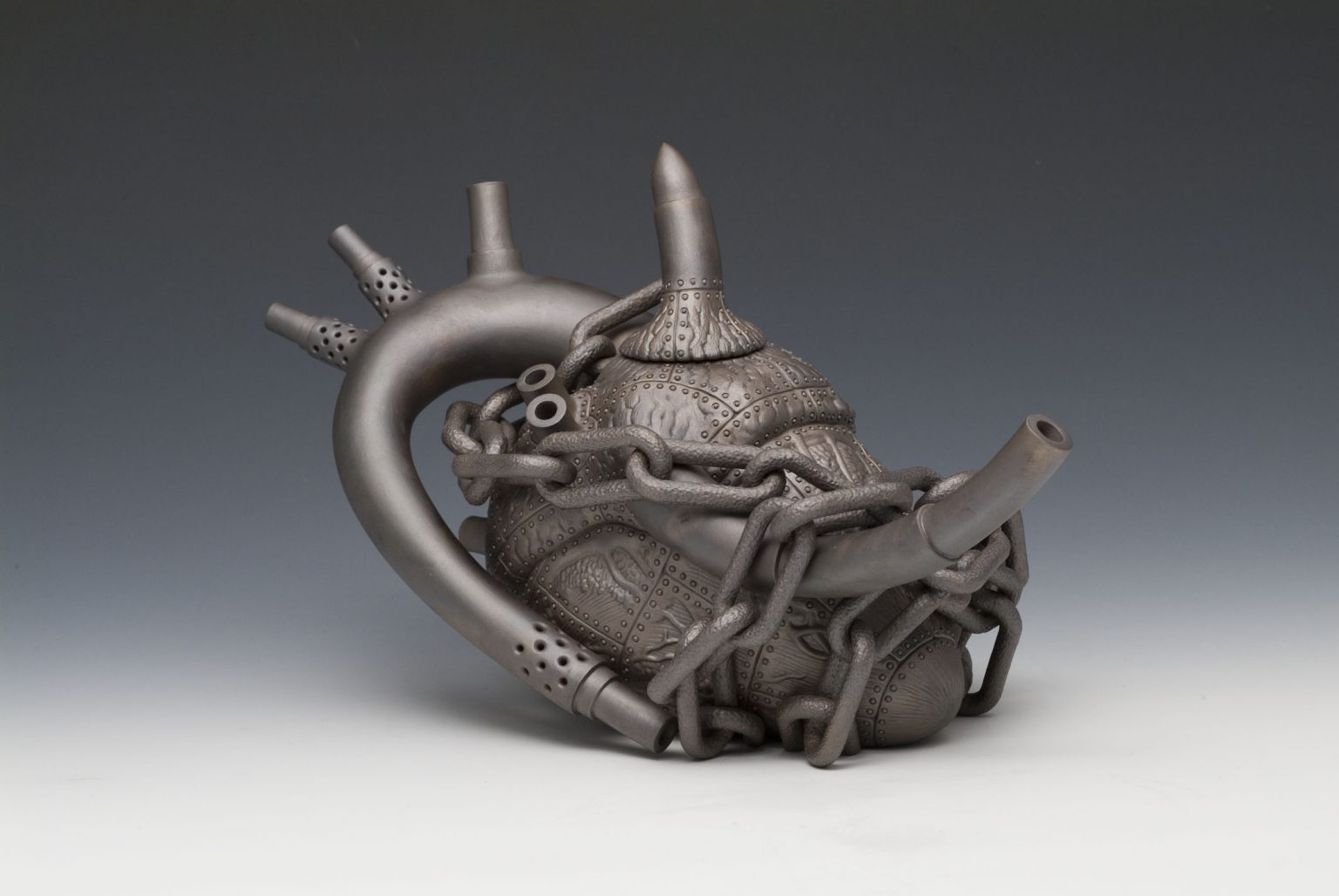 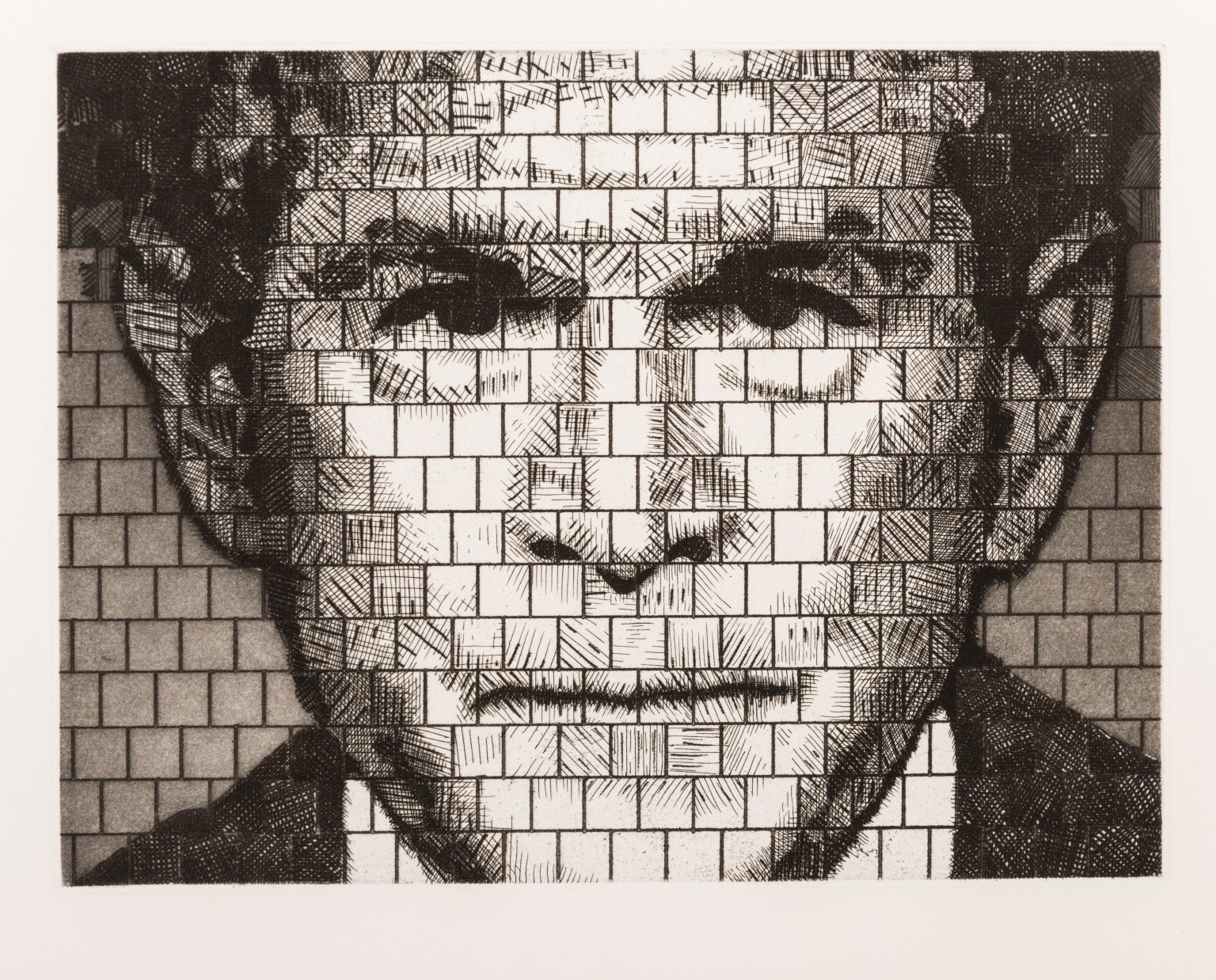 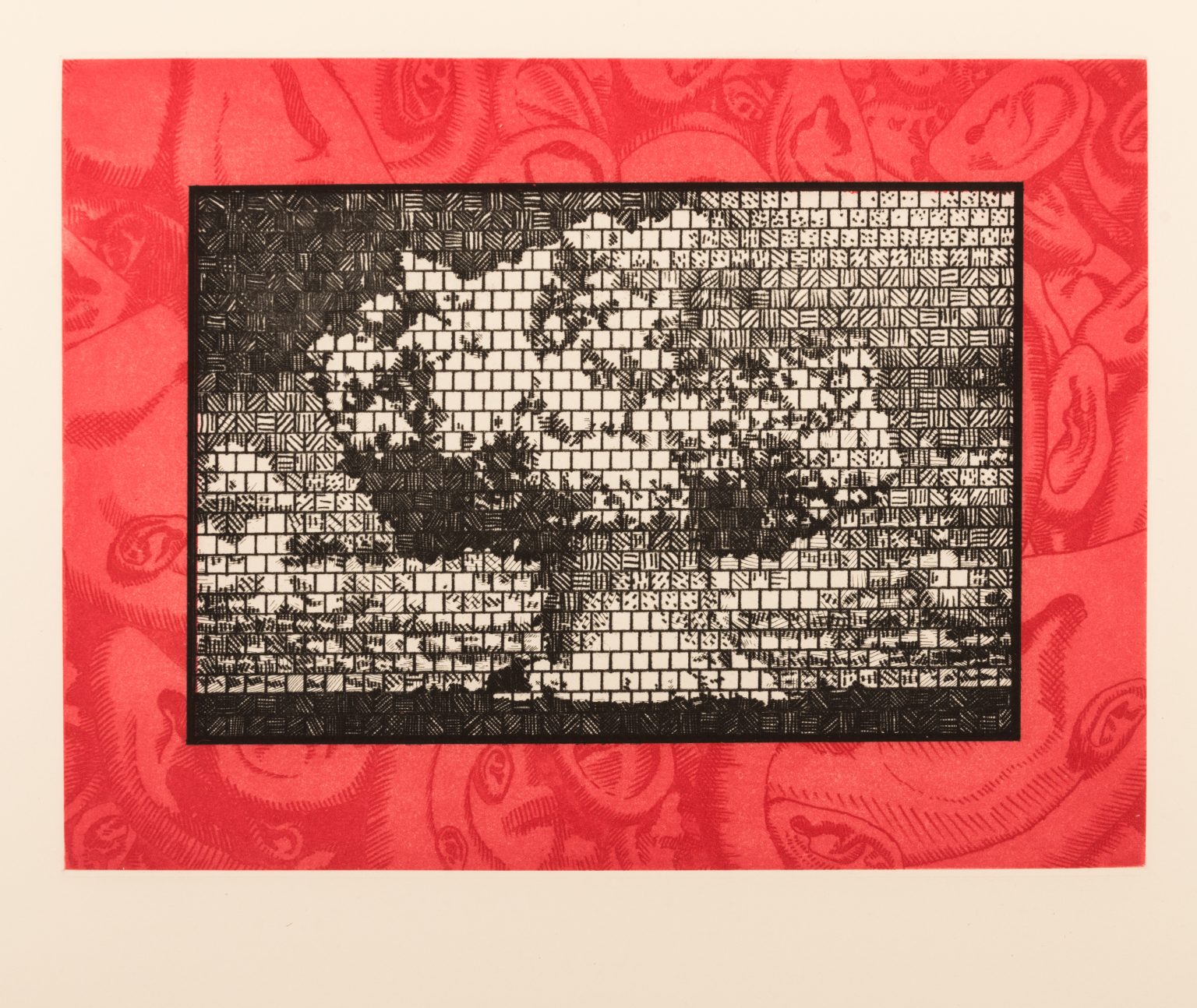 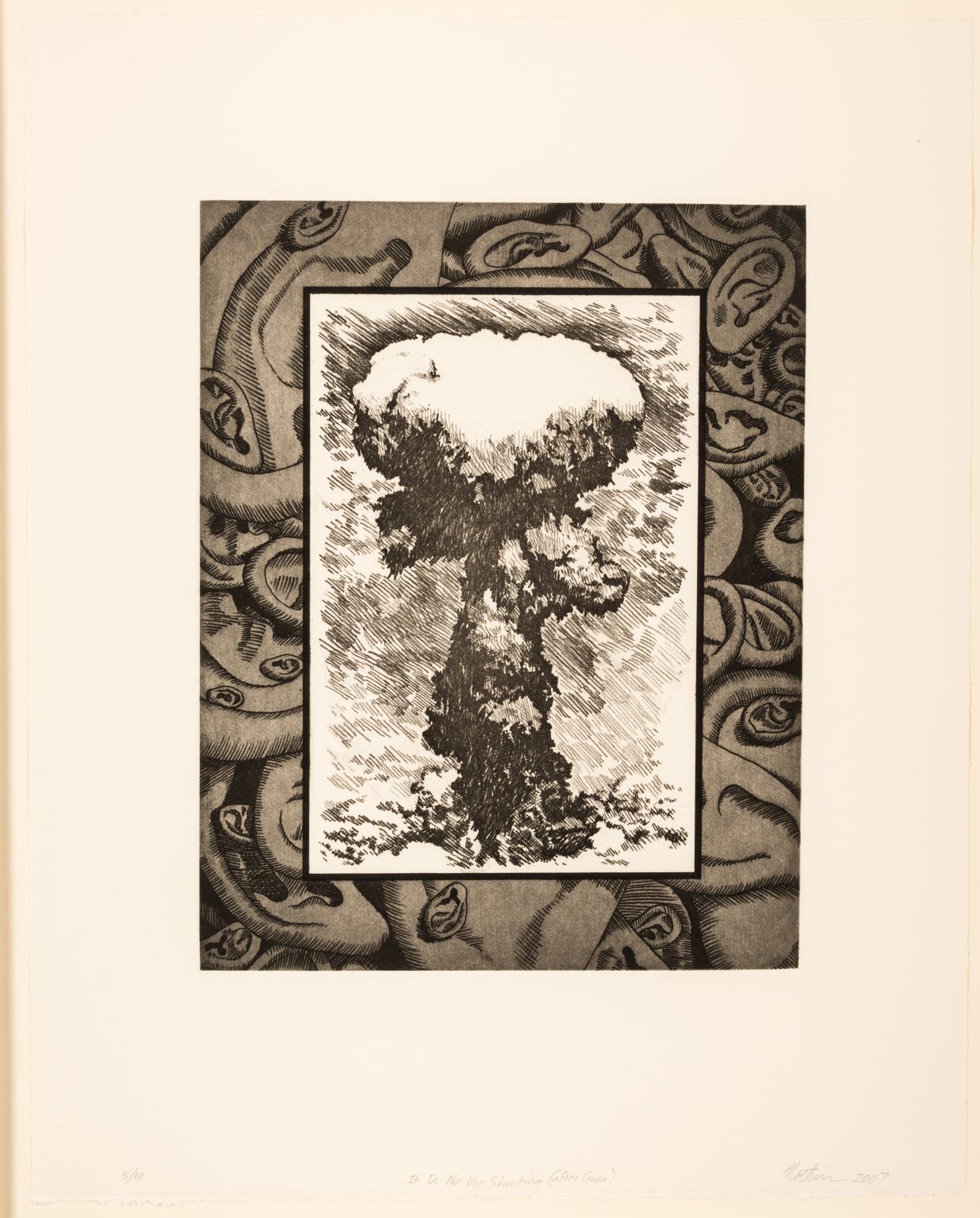 During the past thirty-eight years, my ceramic sculptures and sculptural teapots have explored the complex environmental, political and economic impacts of contemporary human civilization upon the ecological and spiritual condition of our planet, and the quality of life of individual human beings. I present these concerns — about which I am passionate (some might say obsessive) — by visually manipulating and juxtaposing various objects, images and symbols to create narrative sculptural works which stimulate the viewer to examine their own innermost feelings. In the past few years, I have begun working with sculpture on a scale larger than my trademark miniature works, and exploring a wide range of clays and ceramic techniques that are new to me. I find myself in a transitional phase that is quite challenging and often difficult, but necessary to the evolution and growth of my art. I feel that to remain viable, an artist must remain forever inquisitive, eternally a student — technically, aesthetically, and conceptually.

My most recent large scale work, All Nations Have Their Moment of Foolishness, is a wall mural, approximately four feet high and five feet wide (46″ x 60 3/8″ to be precise). It consists of 344 separate unglazed earthenware tiles, each slightly smaller than three-inches-square. The tiles are fired in sawdust-filled saggars (refractory clay boxes with lids) to achieve a wide range of gray shades, from pure white to jet black. The positions of each tile in the saggars determine the shading of that particular tile, depending on the degree of oxidation or reduction (a lack of oxygen) each tile receives during the firing of the kiln. Oxidation results in lighter tones, while reduction results in darker, often charcoal-like surfaces. Tiles which face the outer, slightly porous wall of the saggar receive ample oxygen, and will fire almost a bright white. Conversely, tiles which are positioned near the center of the saggar receive very little oxygen, and will emerge nearly jet-black. Tiles which have one edge facing towards the saggar wall and the opposite edge extending into the saggar interior will have a gradation of values, sometimes from very light to very dark across their surface. The depth of the carved reliefs also affect the modulation of surface tone, as the tiles are fired face to face with sawdust compressed between them. The resulting shadings offer random mottled surface variations.

After firing the saggars in my natural gas downdraft kiln, the tiles are sorted according to their shading by 10% increments on the gray scale. A photographic image which is to be enlarged in ceramic tiles is overlaid with a transparency upon which is printed a grid in a staggered, brick-like pattern of tiny squares. Each square is numbered by column and row. A wooden backing of 3/4 inch particle board (which is less prone to warping than plywood), is cut into multiple sections — each of which will contain eight horizontal rows of tiles — and a framework with French cleats for hanging on the wall is glued and screwed to the reverse side. The front is prepared by drawing a matching grid in 1/2″ thick black lines in the scale of the fired tiles, and each square is numbered to correlate to the gridded photograph. To begin to assemble the final image in tiles, each square in the gridded photograph is evaluated for gray scale and shading modulations. A tile which most closely approximates a corresponding square in the photographic image is then chosen and attached to the particle board backing using a high quality clear silicone glue. As more tiles are added, the image of the photograph begins to appear, especially from a distance.

While the natural gray tones of the arranged earthenware tiles create an illusion of a three dimensional face, focussed details are lacking in the evolving mural. Therefore, certain highlights must be added, such as the sharper lines around the suit jacket, the ears and jaw, between the lips, and delineating the nostrils and irises. These detailed areas are brushed on in multiple transparent layers of a dark watercolor stain. As the fired earthenware is quite porous, the stained surfaces are quite mat, and with careful application this highlighting of the details matches the appearance of the natural colors in the tiles.

All Nations Have Their Moment of Foolishness depicts the closely cropped face of George W. Bush. The image was chosen not to ridicule, but to capture some essence of the man. This particular image of Mr. Bush impressed me for its lack of expression or emotion, and the visually prominent dark irises. (I have tried to imagine, in
vain, what is occurring behind them.) As the viewer approaches the piece for a closer examination, the highly detailed, individual tiles dominate. Relief images impressed on the tiles include buildings and cities demolished by aerial bombardment, the rubble of bricks and charred beams with occasional skeletal remains, nuclear mushroom clouds, the infamous hooded prisoner in Abu Ghraib Prison, barbed wire, bombs falling, and additional images of war and destruction, including the iconic screaming horse from Picasso’s painting, Guernica, which has become one of the great antiwar icons in the history of art. I have also included some of the more recognizable images from my past works which also pertain to our many human follies, such as the “cube skull” icon, dice, brain and heart tissue, wooden crates, ears, etc. As a final ironic twist, I have added a few tiles which depict the feet of Christ, a relief I carved based on a detailed view of Michelangelo’s Pieta. This image is intended to reflect on the self-proclaimed “War President” as an equally self-proclaimed devout follower of the “Prince of Peace”.

Thus, the piece operates on two different but interconnected levels: from afar, the composite photographic image which is a sum total of its 344 separate parts, and from a closer, more introspective viewpoint, in which the implications of the fragmented images on each tile are related back to the whole. The complexity of the piece and these opposing scales — first macro, then micro — imbue the work with a sense of diametric opposition and lead the viewer to intended conclusions.

I am asking questions in my art that I intend to be directed at everyone, not only those who are practitioners and followers of the contemporary arts scene — the choir, so to speak. It is my desire that my work be accessible to the average person, the non-art-world-insider. Many of these “everypersons” may disagree with my sentiments, but few will misinterpret my intended message. If the piece only provokes a spirited and meaningful dialogue, then it has accomplished more than our mainstream (read: collaborative and propagandistic) media seems capable of these days. Art’s greatest value is to touch people in profound ways, in ways that can even, on occasion, change lives.

After nearly four decades of creating ceramic sculpture in the realm of social commentary, I have come to the following conclusion: to be effective, art that conveys social/political commentary should be, first and foremost, visually and aesthetically strong. If a work of art isn’t well conceived and executed in all of its myriad components, both technical and conceptual, it fails aesthetically and will lack the power to hold an intelligent audience’s attention, let alone challenge that audience to ponder significant questions.

But can art truly change the world? It already has. Imagine a world with absolutely no art at all, no form of creative expression whatsoever. I am referring not only to the works of visual artists, but also to musicians, dancers, playwrights, filmmakers, novelists, poets, etc. When we look back on human history, we marvel at its creative accomplishments, the arts and architecture of past cultures and civilizations. Throughout our history, great works of art have illuminated, in a collective and timeless sense, the innate creative spirit with which our species is endowed. Occasionally a work of art has a profound impact on much of the population of our planet. Consider the ironic sentiments clashing with brutal realities expressed in Francisco Goya’s Disasters of War series of etchings, or Pablo Picasso’s powerful protest painting, Guernica; these are examples of great artworks that for millions have epitomized man’s inhumanity to man. Even pop culture can produce profoundly influential works of art, such as Bob Dylan’s Blowin’ in the Wind, which became the anthem of a generation of youth protesting an earlier unethical and misguided war. Ultimately, humankind’s best creative achievements stand in stark contrast to our opposing, but equally innate, destructive tendencies.

Contemporary art critics might dismiss All Nations Have Their Moment of Foolishness as a blatant and obvious piece. It most certainly is, by choice and by design — I didn’t want to “beat around the bush”, so to speak. Responding to those who would favor a more esoteric dialogue — such as debating the proper place and style in the post-postmodern era for 21st Century ceramic arts — frankly, I don’t give a damn. My concerns lie elsewhere. At a time when our very survival as a species is in jeopardy from myriad and quite real threats, that dialogue seems to me to be an exercise in the proverbial rearranging of deck chairs on the Titanic. Instead, I strive to work in the spirit best expressed by George Orwell: “Speaking the truth in times of universal deceit is a revolutionary act.” I admit that “truth” is a very subjective notion, but if an artist can’t express that which he or she is most passionate about — his or her innermost convictions and beliefs — then what is the point, and what the hell can an artist express? I work from the deepest source of inspiration for an artist — my passions. Anything else would be a waste of the finite moments that comprise my life. Time is the only thing that we truly possess while we are on this planet, and for an artist, time is also a tool, another material with which to work. An artist’s greatest gift and privilege is to spend his or her time making art.
Ultimately, my current works are about lessons heard, but not heeded, during the 20th Century, and how these ignored lessons will affect this new century and the human species ability (or inability) to survive the next 100 years. My work is a visual plea for sanity. It’s really quite simple.